The NordicTrack 2950 is the top-of-the-line treadmill in a Commercial series that also includes the bestselling 1750 and 2450 models.

But how does it compare in terms of features, and what can we expect in terms of upgrades since the earlier 2450 design?

In this review, we’ll be taking an in-depth look at everything from the design and safety features, through to the workout programs and warranty, to help you decide if this is the best option for your own home workouts. 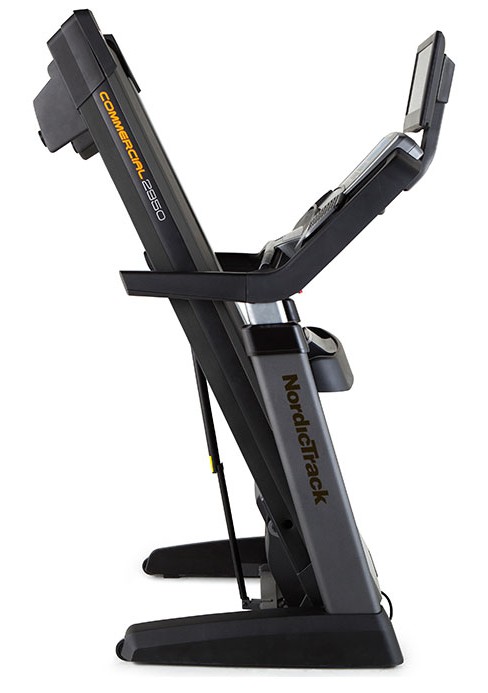 When we reviewed the NordicTrack 2450 we didn’t notice that many differences in terms of the running deck design, apart from an increase in motor power.

In upgrading to the NordicTrack 2950, we’re seeing a similar pattern whereby the motor power upgrades, but most of the other features stay the same as the entry level 1750 model.

The belt and incline are now powered by a 4.25 CHP DurX motor, which uses cooling fans to reduce the wear on internal components and help prolong its lifespan. This is one of the reasons NordicTrack have included it in their lifetime warranty.

The running area is the same size as other treadmills in their Commercial series, measuring 60″ (L) x 22″ (W). This is 2-inches wider than the machines in their ‘C series’, and provides enough space for taller users to build up to their full natural running stride.

Having a 15% incline and 3% decline range also puts the 2950 model level with others in the series, as well as with the top-of-the-line C 1630 from the earlier C series.

Walking, jogging, or running at this level of incline helps to burn more calories over the same time period than if you were using a treadmill with a flat running deck. You can also focus more on specific muscle groups, with steep inclines working more of your glutes and hamstrings, and flatter or decline angles better for toning and strengthening your quads.

For the deck cushioning, NordicTrack have opted for their Runner’s Flex system, which can reduce the impact on your knee and ankle joints by up to 30% when activated. You can also deactivate the cushioning to emulate the feeling of running on the road.

Underneath the belt you also have a set of 2.5″ dynamically balanced rollers, which help to reduce the wear on the belt and provide a smoother, quieter workout experience. This is the same size as on the two other Commercial series treadmills, but increases to 3″ on their Elite 9700 Pro model.

Safety features
To ensure the NordicTrack 2950 is safe for home and family environments, three safety features have been added. 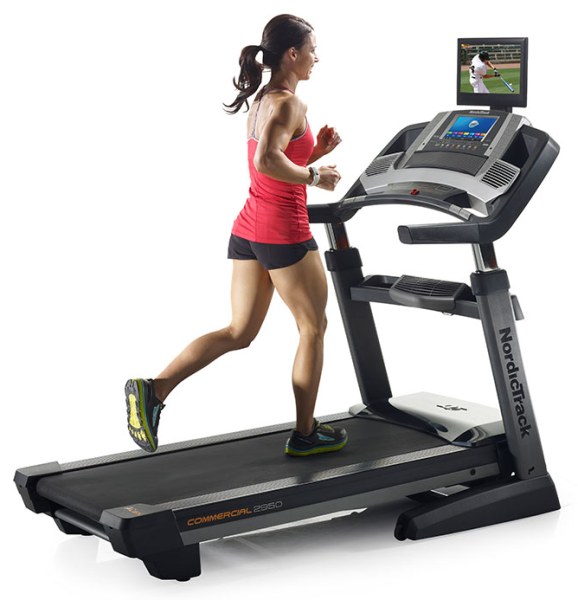 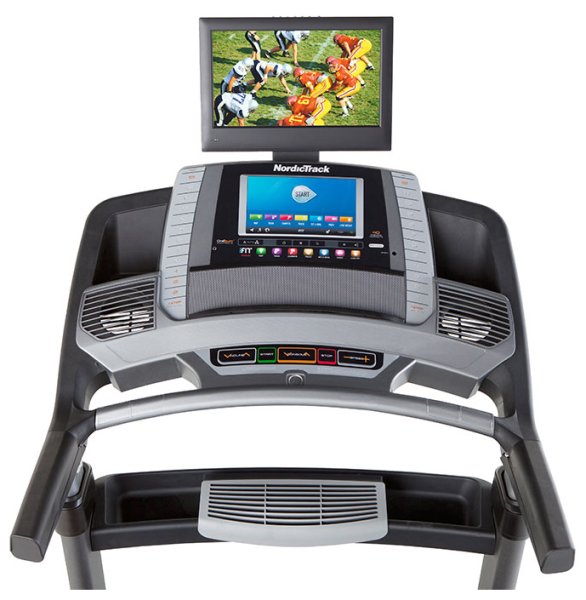 Although many of the running deck features remain the same as the earlier 2450 model (belt speed, incline, size of the running area), the console is where you really notice the improvements.

The biggest difference is that the entire console is now height adjustable. This means you can raise and lower the display screens and hand rails to the position that’s best suited to your height.

This helps to give you the clearest view of the 15″ HDTV, as well as the 10″ full colour touchscreen, which can either be used to show workout stats, or a Street View image from Google Maps if you’re using iFit.

Corner-to-corner, this screen is 3″ larger than the other treadmills in the NordicTrack Commercial series, providing a wider viewing angle and icons that are easier to press when running.

The 10″ screen is also web-enabled, meaning you can browse the internet, check social media profiles, and catch up on your emails while you workout.

If browsing the internet and watching TV via the extra-wide display screens isn’t enough entertainment, there’s also a port for connecting your iPod or MP3 player. This means you can listen to your favourite motivational music via the built-in speakers while you workout, and adjust the volume via controls on the console.

In addition to the menu options on the Android powered touchscreen, you also have OneTouch™ Controls along each side for an easier transition between the various speed and incline settings.

When you’re using the screen to display workout stats, you can view feedback for the following metrics:

The NordicTrack 2950 also offers two forms of heart rate monitoring: touch, and telemetry, for if walking, jogging, or running in a target heart rate zone is important to you.

CardioGrip™ sensors built into the handles can be used for shorter periods of time, or if you want to guarantee a continuous reading on the display, you can also use a Bluetooth heart rate chest strap (included).

To help keep you cool during your workouts, the 2950 has also been fitted with two AutoBreeze™ workout fans, one in the console itself, and the other built into the accessory tray.

The integrated accessory tray is a useful feature to have with the HDTV, as it can be used to store the remote, smartphone, water bottle, and a number of other small items you might need.

Finding a treadmill that offers enough workout variety to keep your fitness routine interesting and motivational is incredibly important.

That’s why NordicTrack are one of the top fitness companies in the industry when it comes to their workout variation, with onboard, manual, iFit, and ‘Set-A-Goal’ workouts all programmed into their 2950 model.

But what can you expect from these programs, and how can they help you achieve your health and fitness goals? 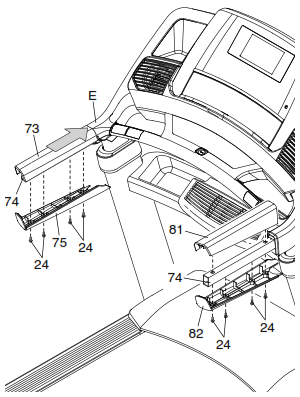 In addition to being one of their most feature-packed treadmills, the NordicTrack 2950 also requires the most assembly.

The running deck and console are pre-assembled, and connecting the two is considerably easier than for the C series treadmills.

But you also have to take into account the upright covers and console height adjustment, as well as assembling and connecting the HDTV if you plan on watching television or DVDs while you workout.

It’s not that the steps are difficult to follow, as NordicTrack do an excellent job of explaining how everything fits together via written explanations, diagrams, and parts references.

If your region isn’t served by NordicTrack’s in-home assembly service, you’ll certainly want some assistance with a couple of the steps, particularly the storage latch attachment which requires some heavy lifting.

Even with two people, because of the number of steps involved you should set aside at least 90 minutes for getting the treadmill setup and calibrated. More time may be needed if you want to connect up a DVD player to the HDTV or for subscribing and connecting to iFit.

Maintenance required
As with any treadmill, the NordicTrack 2950 requires a certain level of ongoing maintenance to ensure the best performance.

This includes wiping down the equipment with a damp cloth and mild soap solution, then drying the belt and covers on a regular basis.

With some treadmills you also have to lubricate the belt with a silicone spray every few months, but because the belt on the 2950 is already coated with a high-performance lubricant, this isn’t going to be necessary.

If the belt slips or moves off-center, it’s easy enough to make adjustments using the hex key (supplied) on the idle roller screws at the back of the running deck.

Folding and transport options
As with the 1750 and 2450 models, the NordicTrack 2950 has been fitted with an EasyLift™ Assist telescoping shock, as part of its SpaceSaver® design.

This allows you to raise the running deck to its storage position, then lock it in place using a latch knob. This holds the deck securely between workouts, and makes it easier to move the machine to a new location using the transport wheels if needed.

When you’re ready to start your next workout, you can release the latch knob and lower the deck slowly to the floor. This helps make the best use of space without requiring any heavy lifting (NordicTrack still recommend being able to lift 45 lbs).

When we reviewed NordicTrack's 2450 treadmill, we compared its features with the earlier 1750 model, and found that most of the specs were very similar. Incline range, belt speed, and console screen features were identical, with upgrades to the motor power and number of onboard workout apps.

We found a similar pattern when comparing the 2450 model with the NordicTrack 2950, but with a couple of more important upgrades.

Being the only NordicTrack treadmill to offer a height adjustable console is certainly an attractive feature, and the motor is one of their most powerful (4.25 CHP DurX™). You're also getting their widest selection of onboard workouts, and a much larger color touch screen (now 10" instead of 7").

At the right time of year, the top treadmill in their Elite series (Elite 9700 Pro) costs the same as the 2950 model. But our personal recommendation would be to stick with the 2950.

Yes the Elite treadmill gives you larger rollers and a slightly more powerful motor, but it doesn't have the 15" HDTV screen - an important entertainment feature if you enjoy watching movies or TV shows while you workout.

Overall, this is a treadmill that's top of its class for onboard workout programs, incline range, running surface area, entertainment features, and warranty coverage. You won't be disappointed with its performance. 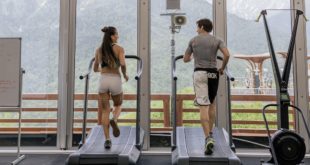 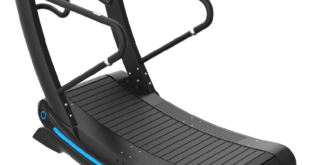 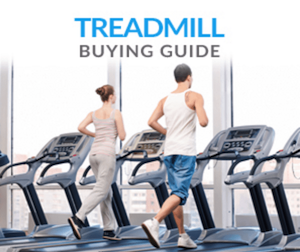